Recognizing Excellence in the Living Classrooms

Home / News and Events / Recognizing Excellence in the Living Classrooms 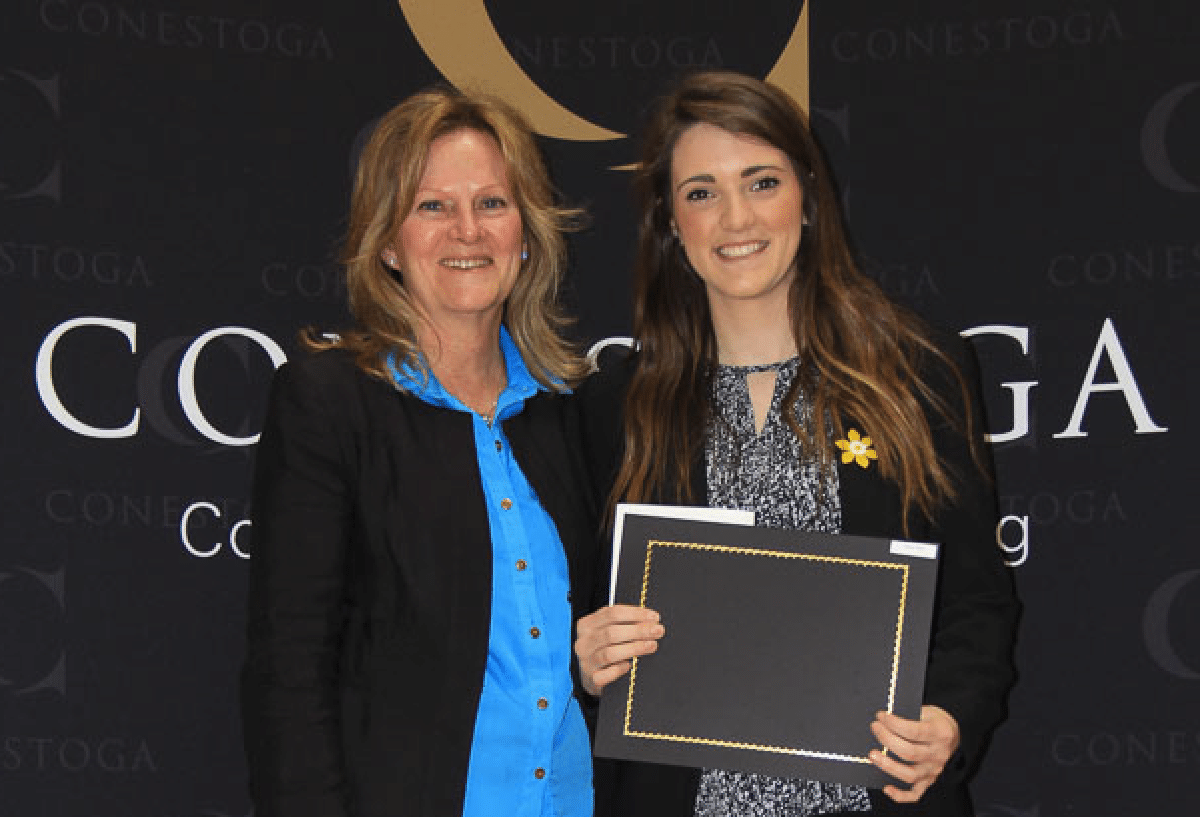 While studying health sciences, Allyssa Wein took a part-time job at a long-term care home in London, Ontario to help oﬀset the cost of her education. That position would end up shifting her career prospects signiﬁcantly, leading her into the practical nursing program oﬀered in the Living Classroom at the Centre of Excellence for Innovation in Aging, a partnership with Conestoga College, RIA and Schlegel Villages.

“That job that I worked at was a huge eye opener and I knew that I wanted to get into nursing,” Allyssa says. “Originally it was just a part-time job to pay my way through school
and then I realized that it was something that I wanted to do forever.”

Like Allyssa, Leanne Taylor also discovered that her path in life leads towards a career serving others, and she recently completed the Personal Support Worker training program at Conestoga College’s other Living Classroom at the Village of Riverside Glen in Guelph.

Both Allyssa and Leanne were among several students from the Living Classrooms to be recognized for dedication and leadership in their respective programs at Conestoga College’s annual awards celebration in early April. Alyssa received the Third Age Learning Academic Grant and TD Financial Group award, while Leanne was among two students to receive a Schlegel Scholarship for Aging, given to students of the living classroom who are outstanding team players and seek innovative solutions while assuming a leadership role with their peers.

“I’m so glad I did this,” Leanne says, considering her choice to become a PSW with the hands-on education provided within the Living Classroom model. “Because we got to go upstairs (to the Village) we got more experience actually working with the residents, and I would suggest for people to do the Living Classroom if they have a choice.”

Leanne was surprised to learn she was among the scholarship recipients, she says, but happy to accept the award and the aﬃrmation it oﬀers that she has chosen her career path wisely. She recently accepted a position in a long-term care home and says the greatest lesson she will take to her new role centres on the word “respect.”

“For me the biggest thing is the one-on-one care with the residents, trying to build relationships,” she says. “For me, it’s not just a job.”

Allyssa is still only mid-way through her program and she intends to continue soaking up every opportunity presented through the Living Classroom to connect with the residents who live at the Village at University Gates. She recently began volunteering on top of her studies, hoping to gain even more insight into life in long-term care while creating deeper connections to the residents.
“Being part of the long-term care home and the living classroom, it appeals that much more to me because I know I want to eventually work with older adults,” Allyssa says. Having that experience right on site oﬀers all she hoped for when she applied to the program, she adds, and receiving the awards was a pleasant surprise – a point of pride and a recognition of the hard work that has gone into her studies thus far as she works towards a future supporting older adults.