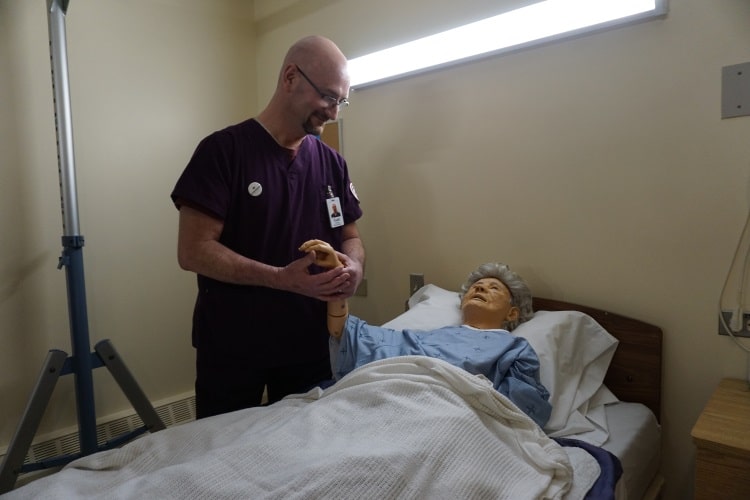 Reprinted by permission from Kenora Online

It’s a bit of a frustrating situation. While the province is looking at funding more long-term care beds, there may simply not be enough staff to look after any new residents.

Michelle Spencer from the District of Kenora has been looking for solutions for a number of years now. While there’s space at Pinecrest for more residents, a lack of staff means more seniors aren’t accepted into long-term care.

“You can give us all the money and the hours in the world, but if we don’t have those people, who are interested in doing that job, we’re no further ahead,” she said.

At Pinecrest in Kenora, they’ve developed what they call a living classroom. It allows staff to learn theory in class, then go down the hall and apply it. One of the students enrolled in the training program through Confederation College is Todd Norlen.

“With the Baby Boomers getting older, we’re going to need more PSWs. So, I think it’s a growing industry. Hopefully, the government and everyone involved realizes that, and we can have enough support workers to give the proper care,” he said.

Norlen is actually part of a bumper crop. Usually, two or four students a year would enroll in the personal support worker courses at Confederation College. However, Norlen’s one of seven students, in this year’s living classroom at Pinecrest in Kenora.

“It’s very rewarding,” he said. “Working with our older clients is fun to do. They have a lot of knowledge. They were once young like us, and they need care, as well.”

Michelle Spencer’s the human resources manager at Pinecrest. She says allowing new students to pay off their tuition by working shifts at the long-term care home is helping.

She would also like to see more people brought into the home at an earlier age, so they get used to the idea that it’s not a scary place.

“They build those relationships and see that, you know what, this is good work. This is giving back, and this is something that might interest me, as opposed to ‘Hey, become a PSW.” Well, what is that, and what does that mean?”

Spencer noted the starting wage of $19.09/hr. and benefits package are quite competitive. Still, there’s a shortage of staff in long-term care homes across the province.

Over the winter months, hospitals in Kenora, Dryden and Sioux Lookout have been looking for more space. The lack of long-term care beds in the district has created a backlog, which means it can be harder to admit new patients into local hospitals.